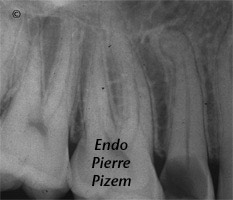 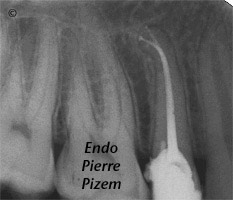 A Vertucci type V pulp space configuration can be described as follow:

One canal leaves the pulp chamber and divides short of the apex into two separate distinct canals with distinct foramina (1-2).
According to Vertucci’s study in 1984 on 200 maxillary second premolars, in 75% of the cases, a second maxillary premolar will present with only a single canal at the apex.
The type V configuration occurred only in 6% of the teeth examined by Vertucci.
Preoperative radiological findings that might help us in suspecting such a pulp space configuration: root canal abruptly becomes invisible short of the apex and not one but two areas of PDL thickening.
We can see one of those two areas on top of the root apice and another one slightly below the 80 degree curved root tip. Many thanks to the referring dentist for sending me such an interesting case.