You are here: Home / Atypical canal configurations / Root Canal Treatment on a Tooth Presenting With a Rare Anatomical Variation 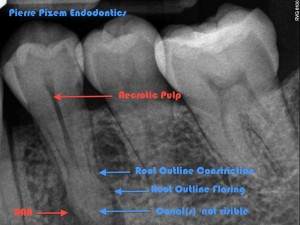 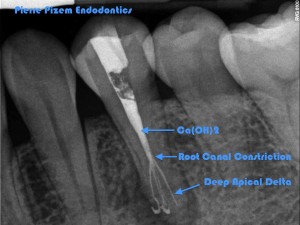 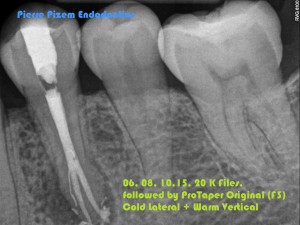 Patient is seen 3 weeks later, no more symptoms, scouting with pre bent 08 K file could not be of any use in locating this third canal entry neither as high magnification with coaxial Xenon light. Two previously located canals are shaped up to a 20 K file, followed by ProTaper “original” NiTi file sequence up to F3 in order to allow for ultrasonication. Adding ultrasonication to same irrigation+drying protocol, Pulp Canal Sealer and cold lateral followed by warm vertical in order to maximize the odds of “sealing” what will remain, despite all my efforts, an accessory canal.