A severe root canal curvature in itself is a challenging preoperative clinical condition. Ledge, root perforation, breaking an instrument, all are potential risks when performing a root canal procedure on such a complex root canal configuration. When performing this type of root canal procedure on a second calcified maxillary molar, both risk factor and level of difficulty are increased because of a more demanding narrow root canal location and instrumentation in the most remote area of the mouth. In addition, due to its triplanar configuration, the severe curvature could not be suspected by observing the pre operative X ray image alone. 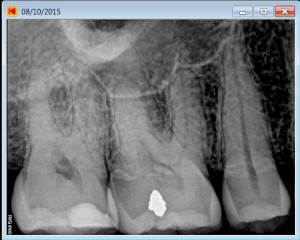 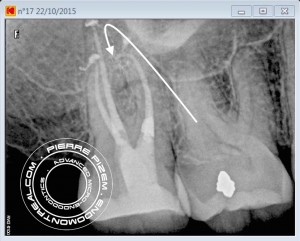 Patient has been referred for root canal treatment on this second maxillary molar. Tooth number 17 presented with an irreversible pulpitis. She was taking Ibuprofen analgesics.

Access opening of the root canal system has been performed with a combination of a 556 cross cut and a round tungsten carbide bur (Friction Grip). Operative field observation has been enhanced with high magnification and coaxial Xenon lamp illumination (Carl Zeiss OPMI PROergo microscope). Dystrophic calcifications have been removed from pulp chamber with ultrasonic diamond coated tips in order to locate both the disto and mesiovestibular root canal entries.