An Endodontic Procedure on a Unique Root Canal Morphology

You are here: Home / Atypical canal configurations / An Endodontic Procedure on a Unique Root Canal Morphology 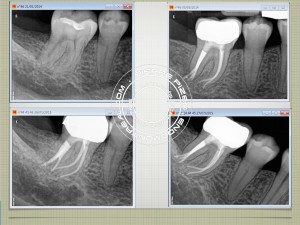 This case has been posted on a specialized root canal FB forum and earned 596 likes from dentists around the world. See this case at:  International Root Canal Procedure Forum

A single canal fast break usually indicate a split in root canal apical third. In this mandibular first molar the canal had split into three branches. Each of it having its own portal of exit. Each branch had to be successively shaped then filled. High magnification with coaxial Xenon illumination allowed to visualize those entries during the procedure. Instrumentation has been performed with Mani stainless K files and ProTaper Universal (Dentsply). Chelator: RC Prep. PUI Irrigation: NaOCl 5%. Ultrasonic tip: BUC One from Spartan. P5 (Dentsply) Sealer used: Pulp Canal Sealer. Obturation technique WVC. X Ray Sensors used: CareStream Kodak 6100.

42 year old patient had pain to both cold and hot and could not eat on this side for the late 7 months. She has been seen by two previous dentists and endured a lot of pain for so long because pre operative X rays showed no signs of visible recurrent tooth decay  as well as no obvious signs of periodontal ligament thickening, both X ray signs indicating a potential need for a root canal. Composite filling also showed no clinical signs of leakage. Upon reading the pre operative Xray we could see that the pulp horns were very long and almost touched the filling. I suggested to remove composite filling in order to check underneath. Tooth decay was indeed present and pulp got exposed before the completion of tooth decay removal. Furthermore a vertical crack line was present in distal. Patient also fractured and lost her second mandibular molar due to clenching.