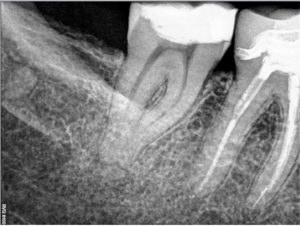 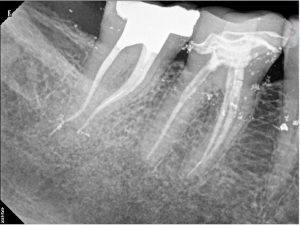 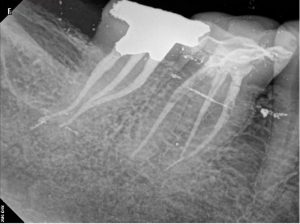 Root canal system in apical third of this second mandibular molar is barely visible on pre operative dental X ray image indicating an almost complete root canal stenosis. When performing root canal shaping and cleaning in such an abrupt canal narrowing with an S form, Niti files will readily break without warning (This happened in mesial root of the molar next to this one. A glidepath has been shaped with stainless K files (06 to 15) prior to NiTi shaping. Pulp chamber is also very narrow and endodontic microscope has been most helpful in this case to uncover the pulp chamber without perforating the chamber floor. A Nayyar amalgam core build up performed during the same setting.