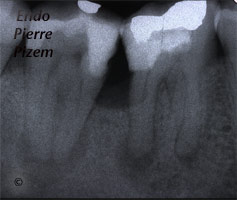 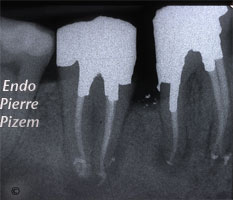 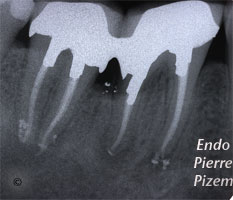 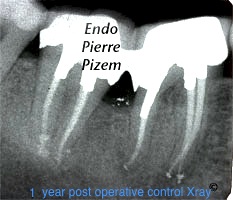 Preserving teeth with Endodontics and Post and Core Build up.
Case Study Number 504046

“according to the current way of thinking, the most important factors against tooth fractures are the preservation of as much as possible sound tooth structure as well as the use of full coverage. The amalgam coronal-radicular dowel and core technique…has been tested successfully in recent studies, both in vitro and in vivo. Its advantages are that it requires less sound tooth structure removal, involves uniform material for both the dowel and the core, is accomplished in a single chair side session and can be easily removed. It can accordingly be used as a complete crown build up in cases where prosthetic treatment has to be postponed for various reasons.”

“This study compared the fracture resistance of coronal-radicular restorations made from three different direct restorative materials. Sixty human premolars were selected, 45 of which were root treated and decoronated. Fifteen of these premolars were restored using amalgam, 15 with composite and 15 using resin-modified glass ionomer. The 15 unrestored teeth were used as a control group… The force required to fracture each core specimen was recorded as well as the proportion of core lost due to failure. The results showed dental amalgam as having the highest fracture resistance (mean 1.93kN, sd 0.22) followed by resin-modified glass ionomer (mean 1.05kN, sd 0.20), sound tooth (mean 0.79kN, sd 0.20) and composite (mean 0.75kN, sd 0.11). The differences among all groups were significant. These results demonstrate that, although resin-modified glass ionomer is significantly weaker than amalgam, these restorations were stronger than unrestored teeth and failed at forces in excess of those encountered in normal mastication. Amalgam cores, along with resin-modified glass ionomer, tended to fail less catastrophically than the other materials and, given their strength, would remain the material of choice in situations where abnormally high forces are expected.”