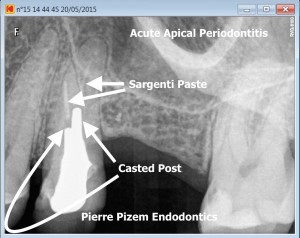 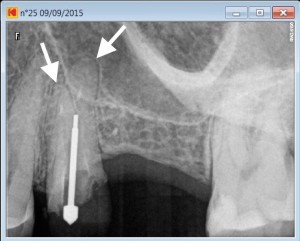 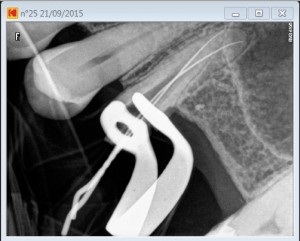 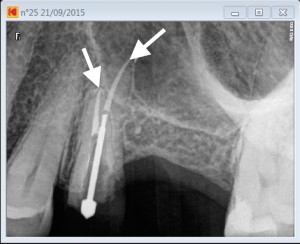 Root canal revision seemed to be a painstaking procedure due to the large casted post cemented within the 2 root canals. Risk of fracturing the tooth while attempting to remove the post is a concern. Still, succeeding in this attempt without fracturing the tooth would allow for an endodontic revision. Using this tooth as an abutment for a 3 unit fixed bridge will spare the patient a 2 implants surgery (witch in turn might as well imply a bone grafting into her sinus). Apical surgery option on this tooth palatal root did not seem to be a good idea either due to the perforation risk of the surrounding sinus membrane. Patient chose to attempt the post removal, and, if tooth would break, he would then opt for the implants.

After crown removal, post has been loosened with a P5 from Dentsply. It took one appointment to successfully remove the post. Half of the Sargenti paste could also be retrieved from the canals during the same setting. In order to remove Sargenti paste, operative field has been enhanced with high magnification and coaxial Xenon lamp illumination.